Eeshan Srivastava is a candidate in the full-time MBA program.

According to Wikipedia, “The Mid-Autumn Festival is a harvest festival celebrated by ethnic
Chinese and Vietnamese people. The festival is held on the 15th day of the eighth month in the Chinese Han calendar and Vietnamese calendar (within 15 days of the autumnal equinox), on the night of the full moon between early September to early October of the Gregorian calendar.” It’s a thousand-year-old tradition celebrating the harvest, and as a matter of fact it also coincided with the sighting of the Blood Moon this year. 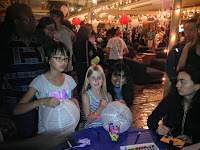 On September 28, our school’s Multi-Cultural club and the Graduate Business Student Association (GBSA) organized a booth at the Thwing Center next to Kelvin Smith Library. Second year MBA candidates Juhi Dubey (club president) and Tejas Choksi (club co-president) and MSM-Finance students Ruiyao Wei (GBSA) and Zhe Wen worked hard to set up the booth and interacted with Case Western Reserve students all evening. I was fortunate enough to view the action from up close. I would estimate that over 800 students attended the event as the Thwing Atrium was completely packed. 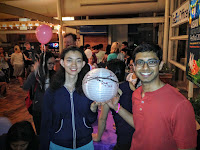 The club’s booth was colorful and lively, having a string of colored lanterns as a backdrop and the table full of painting materials, candies and thin strips of paper having riddles written on them in both English and Chinese. Students who visited the booth could win a colored lantern by correctly answering a riddle (I was able to answer two riddles!). They could also paint a white lantern and take that with them. One student amazed us with her artistic abilities by creating a beautiful painting on a white lantern. Students could also get their names written in Chinese, in a calligraphic style. Grads, undergrads and even kids visited the booth and had a fun time!

The festival itself had several such booths by different student groups and featured a variety of activities and games traditional to the Chinese and Vietnamese culture. The Thwing ballroom was set up to provide ethnic food and saw a massive queue of students line up to get a taste of those delicious cuisines. It was a great night of fun and togetherness for the students of Case Western Reserve and I hope we continue the tradition next year as well.

Check out all of Weatherhead's student clubs.