The Global MBA: Educational Expectations, and Cultural Misunderstandings Within; and Training to be Rockstars

Michael Tasse is a student in the Global MBA program at Weatherhead, a distinctive graduate program where participants travel and study throughout China, India and the United States in a full-immersion experience.
Recently, the Global MBA took on a set of new courses about a month before final exams. One of the stresses of the semester at XLRI in Jamsehdpur, besides the rigor of the mathematical analysis coursework, is the frequency of last-minute schedule changes.

And I’m going to tell you why I think that, while it is annoying-as-hell to show up to class only for it to be rescheduled for later that day, or to receive an email at 11 p.m. from your professor about a class you will have at 9 or 11 a.m. the next morning, it is indeed an important step in making you a stronger, more disciplined global MBA student of management.

The problem lies in the assumptions. We as American or Chinese (or Russian, Nigerian, Dominican, Colombian…) students of the program rest on an assumption that we enter our MBA, we receive a schedule, and we can do as we choose throughout the free time we have that is not on that mostly set-in-stone schedule. We are used to that style of education, so much so that when we must exist in a turbulent scheduling system, we become frustrated, anxious and can even become angry at the institution. I will be the first to admit, that when I came home from a family dinner at the house of my friend (and GMBA Senior) Aditi Murarka’s around 11 p.m., I was angry to receive directions from a professor to complete an assignment due the next day!  I was feeling ill with the flu and other bodily ailments that brought me home from Aditi’s early, only to receive an email from 10:45 p.m. stating I had to write a Case Analysis worth 15% of our grade by the next class (the following day), AND I had to get together with my group of four and crank it out! I admit, I bounced to my phone to check my WhatsApp and WeChat notifications, hoping to join in on my frustration with certain expletives now in English, Mandarin and Hindi!

And yes, I did that.

I found many others doing the same. It was almost a bonding experience, which I will get to in a moment.

Then I received a private message from Sammy Bandy, who suggested, “No use in further complaining [Tasse]” and after thinking “What an ass!” of him for calling me out, I thought to myself, “He’s right.” 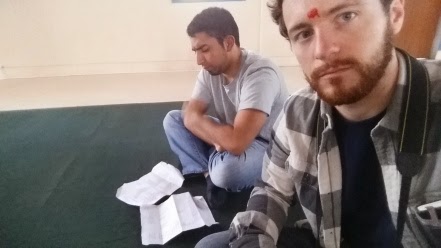 Sammy Bandy, studying rigorously a set of Hindi phrases before presenting in front of the Catholic Bishop of Jharkhand at a spontaneous event Jesuit Fr. Alwyn Rodriguez invited us to in the villages outside of Jamshedpur. Sammy gets it: there are more perspectives than one, and sometimes the “late night email and tough assignment” is about more than just the assignment.Was I mad at the professor? Yes. Was I sick and aching with a fever? Coincidentally, yes. Was it just days before finals week and he was assigning us a 15% project? Yes.

This is not an exaggeration.

I went back to the message boards before I went to go meet with my group, as the clock was striking 11:30 p.m., and I saw on Facebook that several students had actually publicly denounced the professor. To me, that was a bit too far. After all, it was just a few assignments that he’d done this to us, and I always try to consider that perhaps other things are going on in his life too, circumstances that I just cannot understand from my point of view as a student. Though, secretly I wanted to high-five some of them, because it was a bit odd. Eleven at night is a tad past the Seinfeld/Larry David 10 p.m. cutoff.

Was I still mad at him. YES! But I also realized something more important than my current emotional state:

I realized that this is the educational difference between top tier Indian schools, and top tier American/Chinese ones. In America, you have your schedule, and you have your free time. You are an independent entity plugging into the educational system for a given amount of time. In India, you sign up to spend two years fully engaged and under the near-complete direction of the educational institution. This is why Indian B-Schools consistently crank out the best and the brightest. This is why students like my brothers and sisters from XLRI have literally spent their entire lives studying and preparing to be in these schools. 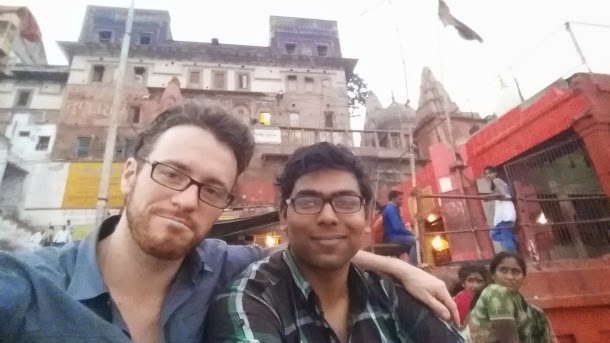 This is Soumy on the right and me on the left. I visited with him in his hometown of Varansi in Uttra Pradesh, India. Soumy understands, and he helped talk me through the situation one day after lunch following the assignment. This man is a brilliant observer of things happening around him. He also loves Bollywood films and the occasional cricket match. Ladies?

I asked Soumy not what he thought about the assignment or the timeline, but what he thought about the reactions of the non-Indian students to the late night assignment. His first response was that of pleasure, in that he was proud that people were starting to feel the heat of the Indian/XLRI experience. His second was that he was a little upset with how people reacted online, but that he understands:

Most people never step outside of their own shoes to try to understand the perspectives of what others are going through.

Meaning that, it was too foreign for the non-Indian students to think that an elite institution like XLRI could literally conscript its students to two years of abiding by whatever standards the professors deem necessary!

You see, in India, top jobs have only one route to access in their company. Unless you’re Hrithik Roshan or Aamir Khan (two Bollywood Actors who just ROCK), that singular route is through Indian B-Schools – aka, Indian Institutes of Management or Ivy Leagues like XLRI. You can argue that this is similar to that of the USA or Europe, where great schools have recruiters that come from McKinsey or Deloitte, etc… But it’s not. You see, there is a double-edged sword to Indian education and the job market because of the massive amount of intense competition for spots in grad school and jobs. (Does your country have over one billion people?) And if you are at a school, and go out of your way to find your “own” job, it instantly sets off an alarm with companies where they will begin to wonder, “Why didn’t this guy get a job via placement at his B-School? There must be something wrong with him.” However, if you can’t keep up with the intensity for 25 years of preparation to get you here and pass you through it, you’re not getting a job via their intensive, highly specified, reputation-based placement committees. (XLRI placed 100% of its students last year in three days. in 72 hours, 300+ XLRI students had jobs with the top firms in the world – not just in India). So there’s a lot riding on Indian B-school students other than just getting a job. This pressure makes an 11 p.m. assignment seem facile; almost negligible.

If we non-Indian students in the program could simply understand that this is the Indian way of developing a strong, disciplined mind, one that is able to endure the rigor of the hectic, chaotic, changing real world, then perhaps so many of us wouldn’t have responded so vehemently.

In fact, when I think about it, all of the complaining and hassle, and falling asleep reading the case at midnight trying to write and write and brainstorm ideas and… all of that was an amazing bonding experience that we will talk about for years to come!

“Remember that time professor gave us an assignment at 11 p.m.…two nights in a row!”

Yes, we did that. Global MBA did it. Survived it. Lived to tell the story.


Now, when that phone call comes at 8 p.m., and you have to hop on your laptop, update your figures according to the new beta values of the market or run down to the plant and make sure everything is okay…

when your child is sick in the middle of the night and you have to care for her and still go to work the next morning, I think all of us GMBA students will be a lot better off because of our experiences like these.

So in the end, when it comes down to it, our professor pushing us not only led to deep discussion and intense reflection of my own actions (i.e., complaining about it), but also some great bonding experiences that were actually the exact thing I wanted in a program.

However great the experience, in which I so nostalgically reminisce, I would be absolutely fine if there were no more of those pop-up late night assignments this semester… 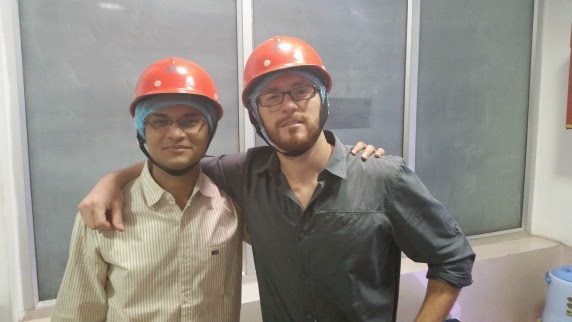 My “yaar,” or dude (in Hindi), Siddharth, prepping to head into the Tata Steel Plant in Jamshedpur. One day we may have to throw on the hardhats at 11 p.m. when the stakes are high. Sidd, the GMBA gang and I will be prepared. 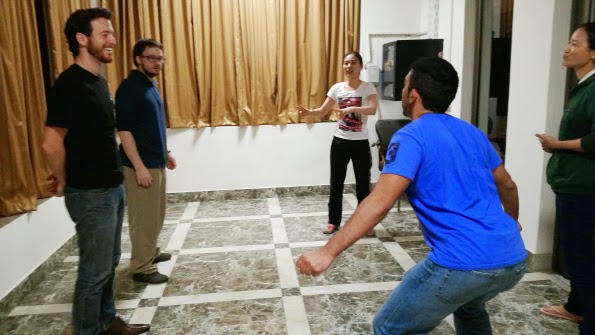 In fact, we often have pop up things we don’t want to do but we have to in order to prepare for the future. Take for example the Chinese New Year Dance we did that Ivy organized. Here’s a pic of Sammy teaching Ted, Vivienne, Ivy and me to shimmy, probably at about 11 p.m. Trust me, we did not want to watch Sammy shimmy. In fact, Ted is actually the best ‘shimmier’ of the group. 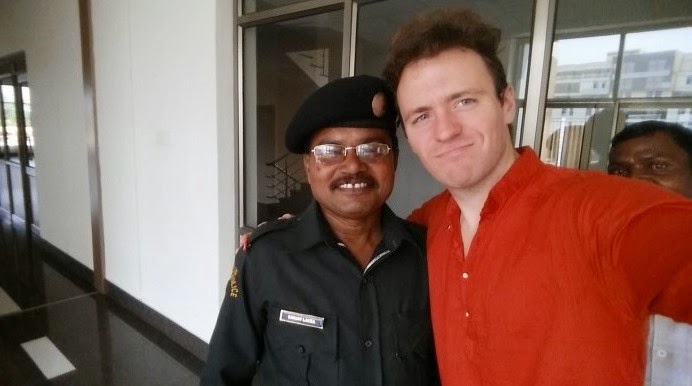 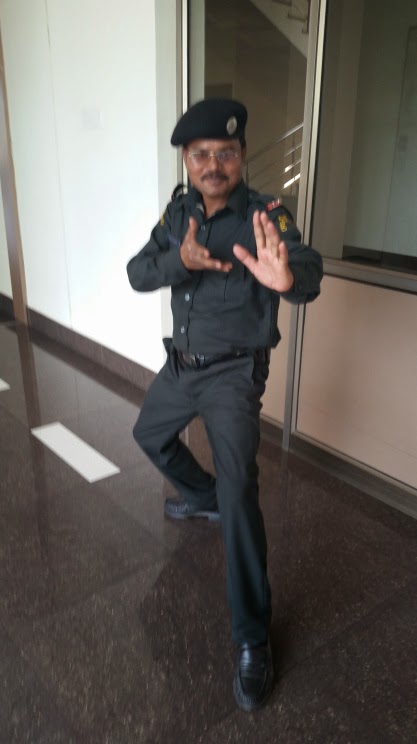 Mere Dost ("my friend") Sanjay! He works night shifts, and morning shifts keeping us safe- I’ve never heard him complain. Then again, he assures me he can “kick ass” with or without energy! No wonder he’s working at an Indian B-School. 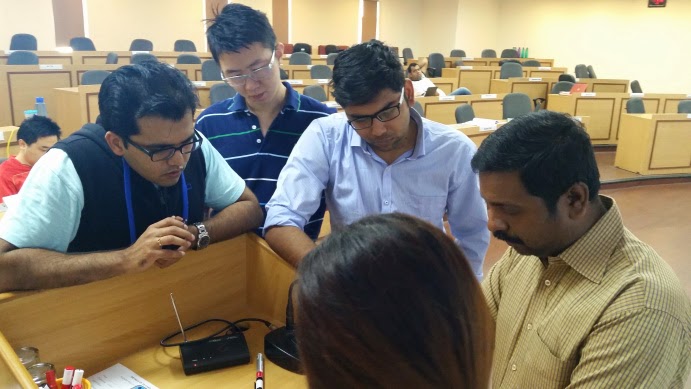 Stock photo of Sagar, Vicky, and Sixto working hard on some project, probably late at night after drinking too much milk-tea 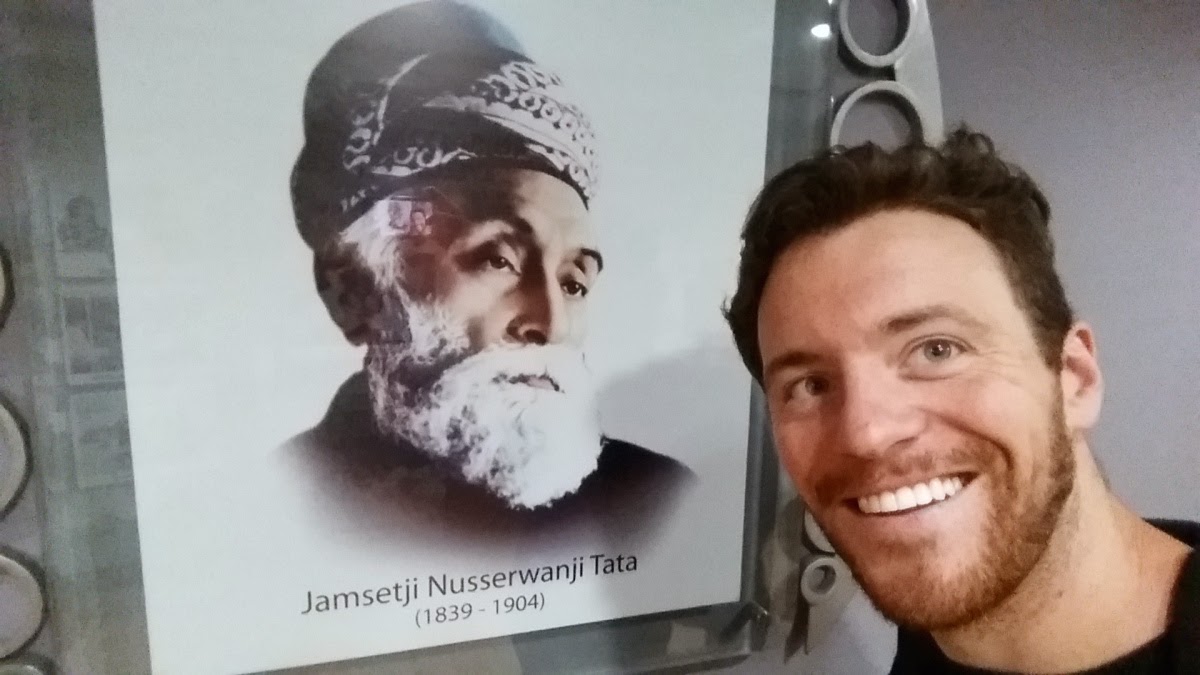 Do you think Jamsetji Tata got upset with 11 p.m. assignments? 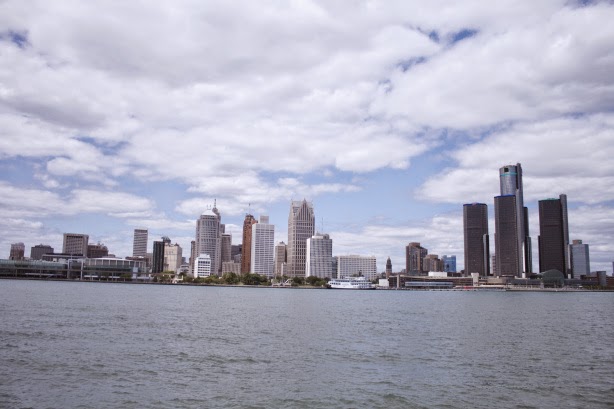 They say DETROIT HUSTLES HARDER, but I’m not sure. Indian B-School Students might be gaining…