The Do's and Don'ts of Internship Search

On the first day of orientation, you hear that you’re already behind on your internship search, and you’d better get to it if you plan on doing anything other than binge watch Breaking Bad between May and September. While that might be a little panic inducing, it’s true: positions are limited, and the applicant pool looks like a salmon farm. 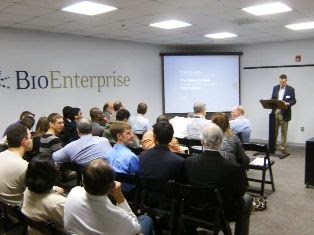 My internship search was riddled with mistakes, but I managed to find a position that has expanded and refined the knowledge base I had been building during my time in the MSM Finance program. I’m working with BioEnterprise, a non-profit in Cleveland that is focused on growing small bio medical companies and commercializing bio science technologies. I spend a lot of my time building financial models for start-ups, compiling reports on venture funding in the healthcare space, and conducting market research on everything from atrial fibrillation to pet oral care.

I had initially heard about BioEnterprise at the Great Lakes Venture Fair from one of their CEOs-in-Residence; her story was inspiring and her enthusiasm infectious—so much so that I forgot to ask for her business card and her name. When I heard about BioEnterprise during a class presentation several months later, I asked one of my professors if he could connect me with anyone at the company. He introduced me to the internship director via email, and I began working as a Business Development Associate two weeks later.

I was pretty shocked that the process was so seamless: I’d requested introductions from dozens of connections I’d made during my first few months at Weatherhead, and while many of those requests resulted in a conversation over coffee or lunch, only three led to potential internship offers. I don’t think my experience was atypical, and I’d guess that many students would credit at least one internship or job offer to vigorous networking.


If I had to do it all over again, I’d try to eliminate a few errors, like not forgetting to ask for business cards, of course—or forgetting which person corresponded to the card I did get. I've also gathered that phone calls on Monday mornings are ill-received, and Friday afternoon emails are never answered.

--
Meghan Finneran
Meghan is a second year MSM Finance student with a corporate finance emphasis. She is currently interning at BioEnterprise.