There’s no doubt about it: succeeding in graduate school is time-consuming. Whether you’re in a committed relationship, single or newly married, managing your relationship commitments in the right proportions while earning your Master’s is challenging. Here’s how some of Weatherhead’s current MBA students are earning an ‘A’ in Managing Relationships 400. 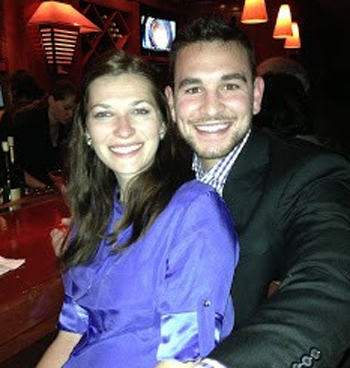 What do you do when you have one month between when the summer classes’ end and the fall classes’ start? You get married, go off on your honeymoon and get back in time for class of course! Josh and Samantha are no strangers to making things work- an approach they have continued as they balance their academic pursuits and personal relationships. Although Josh is in the part-time program and Samantha is in the full-time program, they still study together and prepare for exams together. They have found another couple who share their part-time/full-time balance. For them, there is no barrier between their relationship at school and away from school. They serve as sounding boards for each other and help to keep each other balanced so school does not become all-consuming. Their recent Super Bowl party was a blend of old friends, new friends and school friends (part-time and full-time). Although they do not have children yet, they view their position as one that allows them to have a blended family and they love how open the Case Western Reserve University community is.


Sharing the Work and the Rewards

When John attended an MBA information session hosted by Weatherhead, his wife Risa attended with him as a way to support him. During that session, one of the panelists shared that she’d had her first child during her second year as a student. In that moment, Risa realized that she didn't have to put everything on hold.  She could do this also. Two applications and not too many months later, they were both enrolled as students in the part-time MBA program at Weatherhead. They had both the opportunity to branch out and connect with others (they were not in the same study groups) and the shared experience of pursuing their goals together. John’s group mates were almost all single and Risa's group mates were all married with children. They were able to have a double vantage point of the members of their cohort. While they did not face the normal challenges of having to explain to a spouse or significant other what they were doing and how much time it would take to accomplish it, they did face other interesting challenges being a couple enrolled in the same program. Risa recalls a classmate’s surprise when she and John received different grades on a homework assignment. Contrary to what others may have assumed, they were individual students, who did their homework on their own. Yes, they helped each other out when one faced a challenge on an assignment, and they provided different perspectives on each other’s work, but it was more like having a group mate at home, versus a clone.

One bit of advice they would give about managing the relationship is to set aside time for you personally and for you as a couple. They chose to enroll together, but after the birth of their first child (incidentally during their second year, like the panelist), they have chosen to stagger their educational pursuits. Risa thinks John should finish first - before she goes back. “One of us should be 110% about the baby”. Risa is very comfortable stating this because she identified in her first class at Weatherhead (LEAD) that family is #1 for her. Her final note of advice is to make decisions that work for you and what’s important to you. If the relationship is important, make time for it. If it is not important (like a relationship with Netflix) then let it go.

Nikki shared that she is lucky to be in a relationship with someone who understands the demands of being a grad student. Her boyfriend is not enrolled at Weatherhead, but has completed grad school and completely understands what it means when she says she has to write a paper all weekend. He has reassured her that he supports her doing what she needs to do and that he will be there when she is finished. Nikki says that her friends who have gone to law school and other graduate programs have also understood. But the friends who had never pulled double duty (work and school) just didn't get it. She shared that she got into an argument with one of her good friends because the friend felt that Nikki was ignoring their friendship in favor of her new boyfriend. The friend just could not understand initially that work was busy and Nikki’s quantitatively intense Fall semester was all-consuming. It was true she didn't have time for her friend, but she also didn't have time for her boyfriend. The difference was that he understood the workload. Nikki says that they eventually worked through it and that the conflict has made them stronger as friends. “We’re fine now. I’m even in her wedding.” The conflict forced them to articulate what they needed from each other as friends and to communicate more openly.

In addition to her friends from before she enrolled, Nikki has formed some really close friendships with members of her cohort. Communication is a key factor in those relationships. She remarks fondly that they have been together for 2 ½ years and have spent a lot of hours at Yours Truly. Their lives outside the program have changed over the course of the program, and they have been there together through the changes. One member of her group has gotten married and another is expecting her first child a month after graduation. She says that they blend their worlds by getting everyone together – group mates with spouses and significant others. These are all important people during this time and will remain so after. While it takes work, it is also necessary to keep the support network strong.

Talk with your partner, spouse, family, kids – and anyone else who will be impacted by your decision to enroll in graduate school and your limited free time. There will be sacrifices to be made, but if you remain open and honest in your communications, in alignment with your values, and willing to work through challenges, you can master relationship management while studying Management.